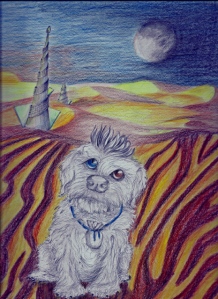 Things to do when you turn 50

Nearly a decade ago, I began writing OddD. Thirty revisions later, it’s a completely different story, one I plan to resurrect as soon as my current WIP, STELLA, is query-ready.

Three years ago, my sister, Umi, and I made a promise that we’d do something fun together when we both turned 50. We didn’t need reminding that we were going to reach this milestone pretty soon – my three kids constantly remind us that we are practically fossils. But we figured it would be the best way to celebrate the fact that two people can live as long as we have without having a single spat! It’s true. Growing up, we were BFFs. She had my back and I had hers. Ours is a special relationship, untouched by harsh words, jealousy, or sibling rivalry.

When we made this pledge, I had four manuscripts in various stages of completion. But we settled on OddD because it had the best potential for an illustrated novel for children ages 10 and up. Umi, who is a veteran IB art teacher at Atlanta International School, had some knockout ideas to portray not just scenes from the book, but also the humor in them. Besides, we both loved the book’s main character, OddD, an alien that takes the form of a peculiar looking dog with a Mohawk and mismatching eyes. Umi and I have owned a lot of dogs over the years and in OddD we saw bits of all those animals we loved so dearly. OddD is a shout out to Bobo, Honey, Keds, Gayson, Doodoo-ma, Scampy, Rai, Sparky, Leila, Spinner, Emma, and Zephyr.

Quite truthfully, if I were a dog, I’d want to be just like OddD—Mohawk and all! And if I were an alien, I’d definitely want to be OddD.

To pursue this collaboration would mean self-publishing. I’m currently in the query trenches with my YA SCENT FROM THE PAST  (originally titled INSTANT KARMA) and don’t want to jeopardize my chances of finding an agent with the blight of self-publishing attached to my name. Umi  graciously concurs. I’ve framed her cover art for OddD as a reminder of our best laid plans.

One thought on “OddD – the journey begins!”

Hey, what do you have to say? Cancel reply